All about Virtualization & Cloud

The files used by Hyper-V VM are as below: In short, to explain:

The BIN file contains the memory of a VM and is located inside the GUID folder. If the VM in powered off state, there will be no BIN file present. This file is the equal to the size of the VM’s memory provisioning in Hyper-V Manger.

The BIN file is simply idle while the virtual machine is powered on; it is pre-allocated so that its space is guaranteed to be available if needed and for quicker response to a save action. However – many people did not like to see their disk space being “wasted” like this.., as BIN file is idle during running state.

It is still possible to save the state manually as long as there is enough room for the file. Above Automatic Stop Action setting in only applicable when Physical computer shutdown.

By default, all virtual machines have an Automatic Stop Action of Save, which means the state of the virtual machine saved to disk. However, the best practice is once Integration Services are enabled the Automatic Stop Action should be changed to “Shut down the guest operating system”, which performs a clean shutdown and no longer needs the BIN file to save the memory content to.

Steps to save storage space by removing BIN File 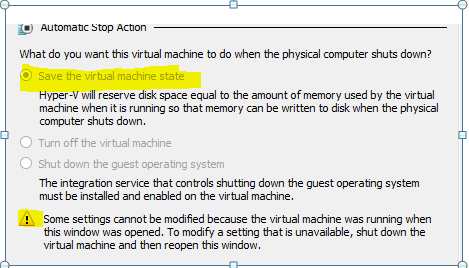