Citrix provides servicing options to give greater flexibility and choice in how to adopt new XenApp, XenDesktop, and XenServer functionality while giving greater predictability for maintaining and managing the support of your environment

Last year, Citrix introduced two new XenApp / XenDesktop servicing options, the LTSR, which stands for Long Term Service Release and the CR a.k.a. Current Release., In 2016, Citrix announced first LTSR of XenApp and XenDesktop 7.6 and in 2017 first LTSR for XenServer 7.1 that is available for download on Citrix.com.

As a benefit of Software Maintenance, Long Term Service Releases (LTSR) of XenApp ,XenDesktop,XenServer enable enterprises to retain a particular release for an extended period of time while receiving minor updates that provide fixes, typically void of new functionality. Long Term Service Releases (LTSR) is ideal for large enterprise production environments where you would prefer to retain the same base version for an extended period

A Long Term Service Release guarantees 5 years of mainstream support and an optional 5 years of extended support (needs to purchased separately). This includes cumulative updates every 4 to 6 months, a new LTSR version of XenApp / XenDesktop every 12 to 24 months and any potential (hot) fixes

A valid Software Maintenance (SM) contract is needed to make use of the LTSR or CR servicing option.

What is Current Release?

Any new release of XenApp/XenDesktop/XenServer will be labeled a Current Release. With the CR servicing option you can always make use of (install) the most recent XenApp and/or XenDesktop versions including all the latest enhancements and additions that come with it.

Its release cycles are much shorter with a new version release being announced every three to nine months in general.

Switching from a LTSR to a CR servicing, and vice versa, is always optional as well

How will the customer know if their environment is Long Term Service Release compliant?

Citrix support and engineering have developed the LTSR Assistant tool which will scan your environment and compare your environment with the necessary LTSR components to determine if you are compliant. The tool provides a report that will outline the necessary updates to achieve compliance. The LTSR Assistant tool is available for download athttp://support.citrix.com/article/CTX209577.

Will a customer running an LTSR compliant environment be supported if they also have non- compliant components?

How often will Citrix release a Long Term Service Release of XenApp and XenDesktop or XenServer?

Citrix will release a Long Term Service Release of XenApp and XenDesktop or XenServer based on the number of features, implementations, customer support cases and general feedback. However, as very general guidance it can be expected that Citrix will release a new Long Term Service Release every 12-24 months; however, Citrix reserves the full rights to alter those timelines.

Is Citrix discontinuing the process of providing Hotfix Rollup Packs (HRP) for XenApp and XenDesktop?

Windows Server 2008 R2 will not be eligible for extended support. Citrix will continue to monitor Windows 2008 R2 lifecycle dates for future determination of lifecycle milestones. 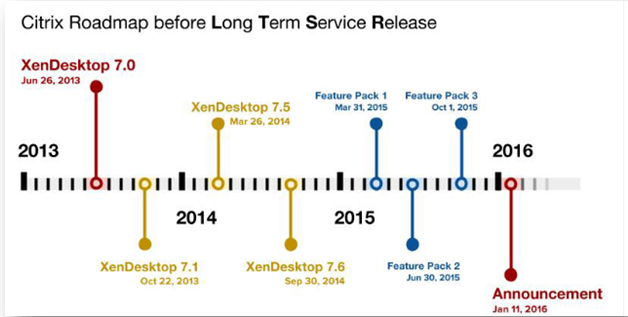