In 15 Node cluster, majority of the virtual machines failed over(restarted) due to network fluctuations while performing network maintenance activity

Delay – This defines the frequency at which cluster heartbeats are sent between nodes.  The delay is the number of seconds before the next heartbeat is sent.

For example setting SameSubnetDelay to send a heartbeat every 2 seconds and setting the SameSubnetThreshold to 10 heartbeats missed before taking recovery, means that the cluster can have a total network tolerance of 20 seconds(2sec *10 HB) before recovery action is taken

So based on the above points, if there is a network outage beyond 10-20 seconds, there will be impact to the cluster and there is no way to avoid this impact on the VM resources. It is recommended to ensure the VMs are moved to the nodes where will be no network impact or to be brought offline gracefully before the network maintenance activity.

Also, MS responded as below for the query which we asked to check and it may not viable in CSV environment as SMB connection drops impacting CSV

Removal and adding of the VM from HA is time consuming and not an easy option and Microsoft do not suggest this option in CSV environment.

All the VM’s are failing over(restarting) unexpectedly from one node to another in 15 Node Hyper-v cluster, post storage firmware up gradation.

Post resolving the issues, we started to find the root cause  of multipathing failure

Each Cluster node will have direct access to a CSV LUN as well as redirected access over the network and through the node that is the coordinator(owner) of the CSV resource. 5120 errors indicate a failure of redirected I/O,  and a 5142 indicates a failure of both redirected and direct.

Warning events are logged to the system event log with the storage adapter (HBA) driver’s name as the Source.  Windows’ STORPORT.SYS driver logs this message when it detects that a request has timed out, the HBA driver’s name is used in the error because it is the miniport associated with storport.

The miniport driver may also be referred to as an adapter driver or HBA driver, this driver is typically written the hardware vendor.

Finally we clearly understood that , between MPIO (IBM DSM) & HBA driver there was a connectivity issue somewhere in the storage stack driver and involved Storage vendor to do deep analysys from storage end.

From Storage team, we  came to know that before storage upgradation activity , Read/Write abnormalities found on volumes i.e, huge Read/write latency found, however they fixed the same before upgradation.

By above statement  & referring few blogs , we understood that ,  in the Draining state volume pends all new IOs and any failed IOs. As storage vendor confirmed that the read/write latency on volumes found abnormal, it would have caused delay in completing I/O for CSV volume and went in to pause state/IO Timeout errors.

There is one timer per logical unit and it is initialized to -1.  When the first request is sent to the miniport the timer is set to the timeout value in the SRB.

The timer is decremented once per second.  When a request completes, the timer is refreshed with the timeout value of the head request in the pending queue.  So, as long as requests complete the timer will never go to zero.  If the timer does go to zero, it means the device has stopped responding.  That is when the STORPORT driver logs the Event ID 129 error.  STORPORT then has to take corrective action by trying to reset the unit.

Also, it is recommended to upgrade HBA driver as it is oldest and CVSFLT.sys,CVSFS.sys by following KB3013767

Issue:
Unable to Start any VM in one of the Hyper-V node(Windows Server 2012) cluster.

Attached is the detailed document with all screenshots. Unable to Start VM -Doc

You need to make 3 changes:

To configure Jumbo Frames on UCS it is done as a QoS policy and the configuration guide is in the link below:

Whilst you are planning to use Hyper-V as your OS, the following configuration guide is quite useful to understand which components on the UCS you need to configure to enable Jumbo Frames:

Find the document with screenshots

Difference between Compact & Shrink in Windows Server 2008 & 2012 versions is,  in Win2008( for VHD)  it  compact’s & shrink if you select Compact option whereas in 2012(for VHDX) we need to shrink if you want to reduce the VHDX size and compact will do only compacts. 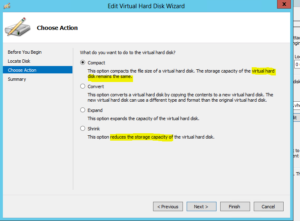 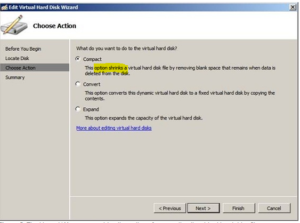