This is the first step when user type the NetScaler Gateway vServer’s address into browser. We need to focus on the SSL handshake between client and server if any issue happens.

Commonly, customer uses LDAP domain authentication. In this article, I will use dual factor authentication as an example (LDAP+Radius).

Get the ica file.

Explained to customer that missing of best practices will lead to these type of intermittent issues , since  there is no root cause found  and it is not a best practice to keep cache on server in production environment , prepared a plan to change cache configuration to” Cache on RAM overflow to HDD”.

Current PVS Storage configuration for cache as below

Proposed Storage change Configuration as below:

Post referring multiple blogs, Write Cache proposed to all images(profiles) is 20 GB -> Therefore , for 86 HSD, 1820 GB required and it should present to complete Hyper-v cluster as HSD hosted on cluster.

How to change Cache Mode for existing production Vdisk:

To replicate to other devices(VM’s)

Since exact root cause was not found, vendor provided & self-analyzed would be the cause for abrupt streaming service termination

When each Target Device boots up the OS is not aware of the Write Cache and writes to the logical disk that it is presented (the vDisk). The PVS driver then redirects this data at the block level to the write cache which in your environment is held on the PVS server. When  BNIStack driver ( transport stack for communicating with the PVS server) is then initialized,  it will pull down chunks of the vDisk as and when they are needed from your vDisk store which is on your PVS server also. The BNIStack driver will also access the write cache directly when it needs to issue additional writes from the target device.  The communication in relation to the above is carried out between the BNIStack driver on the target device and the Stream Service on the PVS server. The case notes state that environment  have approximately 2000 users which I suspect is putting a large overhead on the Stream Service responsible for servicing all Write Cache requests.

As explained above, the recommendation to mitigate this is to move the Write Cache away from the PVS Server itself and place the processing overhead at the target device instead.

Revert the snapshot which was taken before installation

Find the document with screenshot in attachment

This article explains the changes for Citrix hotfix naming conventions in XenDesktop 7.1/7.5 with the introduction of XenApp 7.5.

With the reintroduction of XenApp in version 7.5, the same underlying components are used for XenApp and XenDesktop. As a result, the ‘XA’ and ‘XD’ designation will not appear in the hotfix name. Instead, the component name is prepended to the hotfix name.

The following components did not change between version 7.1 and 7.5. From now on, updates to these components will only contain the 7.5 association in the name. The hotfixes will be available and compatible with both the 7.1 and 7.5 component versions.

Note: The previously released version 7.1 hotfixes will not be rebuilt with the new version identification, but the hotfix readme documents will reflect their support for versions 7.1 and 7.5.

Error: You cannot access this session because no licenses are available -Xen Desktop

Check the configuration of the site: XenDesktop License edition and model using PowerShell command “Get-BrokerSite”  which shows license configuration for the site.

To configure the site to use the Platinum edition, use the following command:

To set up Virtual Machine hosted applications to use Platinum edition:

In this case, upgrade the database as prompted by XenDesktop Studio.

Restart the Desktop Studio Server, error should no longer appear.

To load Citrix snappins ,  you need to add the Citrix powershell snapins. To do so, type : Add-PSSnapin citrix*  or asnp citrix*

Note: The above details can also be fetched by logging to SQL configuration database(Table: DesktopUpdateManagerSchema.ProvisioningScheme)) 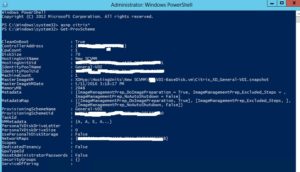